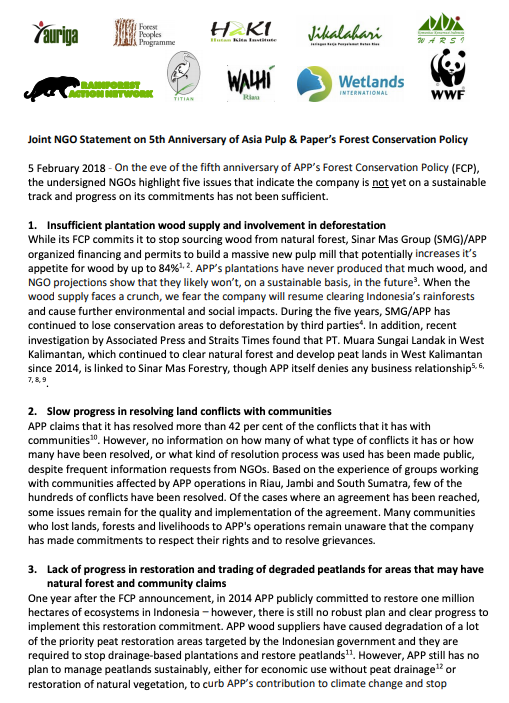 AURIGA -  5 February 2018 - On the eve of the fifth anniversary of APP’s Forest Conservation Policy (FCP), the undersigned NGOs highlight five issues that indicate the company is not yet on a sustainable track and progress on its commitments has not been sufficient.

1. Insufficient plantation wood supply and involvement in deforestation While its FCP commits it to stop sourcing wood from natural forest, Sinar Mas Group (SMG)/APP organized financing and permits to build a massive new pulp mill that potentially increases it’s appetite for wood by up to 84%. APP’s plantations have never produced that much wood, and NGO projections show that they likely won’t, on a sustainable basis, in the future. When the wood supply faces a crunch, we fear the company will resume clearing Indonesia’s rainforests and cause further environmental and social impacts. During the five years, SMG/APP has continued to lose conservation areas to deforestation by third parties. In addition, recent investigation by Associated Press and Straits Times found that PT. Muara Sungai Landak in West Kalimantan, which continued to clear natural forest and develop peat lands in West Kalimantan since 2014, is linked to Sinar Mas Forestry, though APP itself denies any business relationship.